In Memory of Michael Jennings

Professor Emeritus Drury S. Caine passed away on October 29th. Dr. Caine earned BS and MS degrees at Vanderbilt University and his PhD degree at Emory University.  After serving as an NIH postdoctoral fellow at Columbia University, he began his independent career at Georgia Tech where he rose to the rank of professor.  Dr. Caine joined the UA Chemistry Department faculty in 1983 as department chair. He served in this role for twelve years and retired as professor emeritus in 1999. His research focused on the total synthesis of naturally occurring compounds, particularly sesquiterpenes, diterpenes and butenolides. He was the 1998 recipient of the Roger Sayers Distinguished Service Award from UA. After his retirement Dr. Caine remained active in the department for several years, teaching classes in organic chemistry and serving as a mentor to faculty and students.  Dr. Caine obituary. 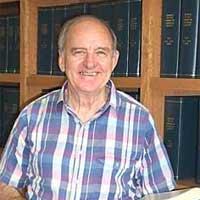