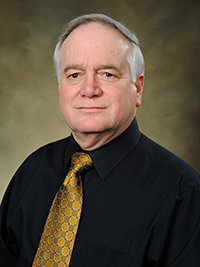 Professor Arduengo’s research interests lie at the interface of organic, inorganic chemistry and material science. They focus largely on the chemistry of new or unusual bonding arrangements. The chemistry of the main group elements is highly varied and provides an excellent domain in which new functional group chemistry can be built. A brief look at some of the research “firsts” from the Arduengo research group demonstrates how the varied chemistry of the main group elements is utilized and the broad scope of new information he has contributed to science. Many of these contributions are illustrated with the novel structures produced by his research group. The Arduengo group’s accomplishments have spanned the areas of new structural chemistry, new reactivity and in-depth characterization of bonding in important molecules. They synthesized the first planar T-shaped, 10-electron 3-coordinate bonding arrangement at phosphorus as exemplified in his ADPO molecule. The group’s study of this highly novel bonding arrangement did not stop with its synthesis and structural characterization. Further work led to vast new reactivity for phosphorus compounds that stems from the ADPO system. Additionally, the Arduengo group used the chemistry of ADPO to discover a new inversion process for 3- and 4-coordinate main group elements.

The Arduengo group subsequently verified this “edge inversion” process through the syntheses of molecules designed to allow its experimental detection. The “edge inversion” process and the chemistry of the ADPO molecules are the cornerstones of much main group element chemistry conducted around the world. This work exemplifies Professor Arduengo’s approach to solving complex chemical problems. His research group couples extraordinary synthetic skills with novel uses of a variety of physical techniques as well as theoretical/computational methods.

Professor Arduengo maintains a long-standing interest in important reactive intermediates such as carbenes. He directed his early work toward the synthesis of an extremely electrophilic carbene. This was accomplished by the synthesis of 1-diazo-2,3,4,5-tetrakis(trifluoromethyl)-cyclopentadiene (DTTC). The carbene derived from DTTC by photolysis or thermolysis is possibly the most electron-deficient carbene currently known. His research group was able to use this carbene to produce the first stable examples of several important classes of ylides. Among the new stable ylides prepared and studied are the oxygen-derived carbonyl ylides, the chloronium ylides and stable nitrile ylides. Prior to Arduengo’s work in this area, no stable molecules in these classes of ylides were available for study.

Professor Arduengo has directed his group’s recent work toward the study of highly nucleophilic carbenes. Their research in this area led to a particularly noteworthy milestone in chemistry – the synthesis and structural characterization of a carbene that can be isolated as a stable crystalline compound at room temperature. The synthesis and isolation of this important class of compounds, imidazol-2-ylidenes, contribute a great deal to the understanding of carbene chemistry. Arduengo’s stable carbenes show the critical importance of using main group elements to vary the chemistry of carbon and indeed illustrates a unique approach to chemistry that considers bonding at carbon as an extension of fundamental chemical principles applicable to all main group elements. Arduengo has extended this chemistry further to explore the unique reactivity of these stable carbenes with elements that represent all sections of the Periodic Table. This work has stirred interest throughout the world and using the principles derived by Professor Arduengo, other laboratories have synthesized stable silylenes and germylenes. Professor Arduengo integrated a wide variety of techniques including solid-state nmr, single crystal X-ray and neutron diffraction, photoelectron spectroscopy, and density functional theory to provide an extraordinarily detailed look at these novel carbene systems. The rich chemistry of Arduengo’s carbenes has led to the structural characterization of another important bonding arrangement, the C-H-C hydrogen bond.

The Arduengo group also extended this carbene chemistry to produce the first stable, structurally characterized, imidazolin-2-ylidene carbene. This carbene contains no double bond in the 5-membered ring to augment the stability of the carbene center. This “saturated” carbene is typical of the Wanzlick carbenes that were studied in the 60’s and 70’s but never isolated. By using electronegativity effects from other main group element centers, the Arduengo research group recently synthesized another carbene that is actually air-stable. In connection with vitamin-B1 research, the group was first to isolate and structurally characterize the thiazol-2-ylidene carbene.