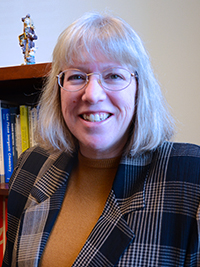 Our FT-ICR research deals with multiply-charged peptide and protein ions produced by electropsray ionization (ESI).  Because FT-ICR is a trapping form of mass spectrometry, gas-phase biomolecular ions can be allowed to react with neutral molecules.  The ions can also be fragmented, which is useful for obtaining structural information.  Most of our recent work has centered on the reactivity and dissociation of deprotonated peptide ions.  These ions are often formed in abundance from peptides with acidic residues, including phosphate or sulfate groups.  We study how amino acid composition, acidity, and sequence affects dissociation and gas-phase acidity (GA), with the goal being to develop negative ion MS/MS as a tool for sequencing peptides in proteomics research.  Our work often involves peptides of known sequence, which are synthesized in-house with our benchtop peptide synthesizer.  Much of this work is performed in collaboration with Professor David Dixon of the UA Department of Chemistry, whose group uses high level molecular orbital calculations to aid to understanding the experimental results.

Our TOF research involves singly-charged ions produced by matrix-assisted laser desorption ionization (MALDI).  The tandem mass spectrometry (MS/MS) techniques of collision-induced dissociation (CID), post-source decay (PSD), and in-source decay (ISD) are used to fragment the ions.  The emphasis is on deprotonated peptide ions, as well as metallated ions.  The effects of experimental parameters on dissociation are studied.  As with our FT-ICR research, we focus on elucidating fragmentation mechanisms and understanding the effects of structural features on dissociation.  We are also exploring the use of capped iron oxide nanoparticles as MALDI matrices for organic polymers and biopolymers.

Our QIT research involves electron transfer dissociation (ETD) and collision-induced dissociation (CID) of metallated peptide ions produced by ESI.  ETD on metallated ions shows great promise as a method for sequencing peptides that are difficult to sequence by more conventional techniques, such as CID on protonated ions.  We are exploring how the identity and properties of metal ions affects fragmentation mechanisms.  In addition, we are studying the ability of metal salts (for example, chromium(III) nitrate) to increase protonation of peptides by ESI and MALDI. This “enhanced protonation” affect could make ETD experiments possible on a variety of peptides and other biomolecules that could not previously be studied by ETD or CID.